Letting Go of Mechanics You Love But That Don’t Work: A Lesson Learned from Designing Good Dog, Bad Zombie 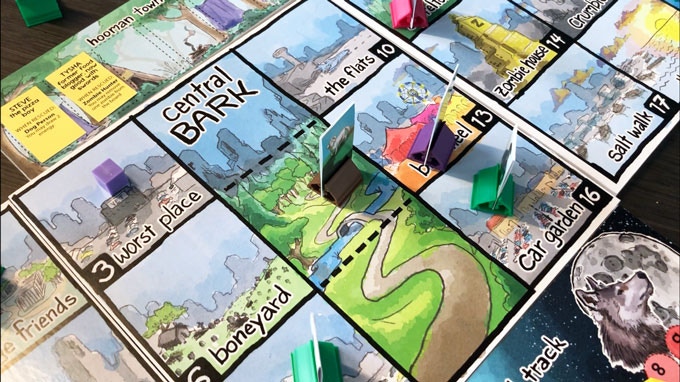 Good Dog, Bad Zombie is a comedic, cooperative board game in which you must bark, sniff, and lick your way through the apocalypse in order to save the hoomans you love! It ran on Kickstarter from May – April of 2018, with over $175,000 raised and another $18,000 raised via pre-orders and late pledges. (You can still pre-order/late pledge to the get the game now!) Good Dog, Bad Zombie will be published by Make Big Things, and it is co-designed by Brian Van Slyke and Evan Rowland.

Creating Good Dog, Bad Zombie has been a three and a half year process, and the game has gone through more changes and developments than we can count. We learned and re-learned so many game design lessons while working on the game, and so we wanted to share those lessons with you all in occasional updates and designer diaries that come in the form of a retrospective.

The theme for this first entry is letting go of an idea you love.

Lesson 1 from designing GDBZ: Just because a game mechanic is fun and cool, that doesn’t mean it’s right for your game.

Of course, this belongs in the “easier said than done” bucket. Part of the excitement of being a game designer is being able to come up with game mechanics – rules, elements, and mixtures that make the play exciting, fun, and unique. Sometimes it’s a slog to come up with these game concepts, and you feel inept and uninspired. Other times, it’s an endless bounty of ideas that you can’t stop thinking about. That makes it especially hard to separate yourself from the mechanics you love the most.

But there’s a snag that happens quite often in game design, where you’ve come up with a mechanic that you feel especially attached to… but eventually, you have to admit that it’s just not working. Maybe it stopped fitting once the game developed further while leaving that particular mechanic behind; or maybe the mechanic never really worked in the first place; or maybe it was a cool idea that just honestly doesn’t fit with this particular game.

Here’s an example that I encountered while designing Good Dog, Bad Zombie: about two and a half years ago, there was a version of the game that used a mechanic we were calling “Call of the Pack.” I thought it was a great feature that would inspire cooperation in the game in a unique way. To summarize, the way it worked was that every single card had a “Pack” symbol on it. On your turn, when you played a card, every other player could “hear” your “call” and immediately play any card in their hand with the matching Pack symbol. This would allow stacks of effects that would inspire teamwork and involve people in the game even when it wasn’t their turn. Neat.

For some reason, I became stuck on this mechanic. Even when I’d break the game down and rebuild it in between playtests, I always kept the Call of the Pack feature in the game out of dog-like loyalty. For some obsessive reason, I thought it was the best part of the game. And I’m not the only game designer who has had this kind of problem. I’ve noticed similar issues occur a lot in the game community. I read posts on message boards with people wrestling with this conundrum, posting questions like: “I really like this mechanic in my game but I’m not sure it’s working… should I keep it? How do I make it better?”

We get glued to these ideas that we think are great, until the ideas own us, rather than us owning them. The game design process then becomes fixated on these particular mechanics that we think define the game, rather than examining the game as a wholistic experience.

Eventually, I admitted to myself that the Call of the Pack mechanic wasn’t working for this particular game. I still liked it – but with Good Dog, Bad Zombie, it was slowing down the gameplay. There were other ways we could inspire cooperation and interactivity. The mechanic was also causing other problems, such as warping the scaling of the game’s difficulty with different numbers of players (because with more players, there were far more opportunities for people to play cards from their hands). So I asked myself, is this a defining feature of the game, or is it simply a means to an ends that it’s not achieving? Reluctantly, I decided to try to rebuild the game with a version that didn’t include Call of the Pack.

Two years later, and I don’t feel attached to the Call of the Pack mechanic anymore. Now, I can’t even imagine the concept as a part of the game. And there is still interactivity on other players’ turns, though it is more passive than I’d initially intended when I came up with Call of the Pack. It turns out that’s a good thing, though, as it allows individual dogs to take the spotlight by creating exciting, dynamic individual turns. One window closes, and another opens.

Save the Abandoned Mechanic For Later

But I didn’t just throw the Call of the Pack mechanic away. I wrote it down, and how it worked, and my thoughts about it. And I saved it for later in an “orphaned game mechanics” document. I now do this with all the mechanics I have to remove from a game but that I still like. I give them a new, temporary shelter until they can find their forever home in another game. I come back to that document often when I’m working on games to see if I can find them a new home. And that’s exactly what happened with Call of the Pack: an updated version of it became a mechanic called “Chain of Events” in another game I published, where it fits in much more smoothly. It became the defining feature of that game.

Letting go of game mechanics that you love is often difficult. It can feel like a serious setback, and sometimes like the game may never recover. There’s a time to try to improve a specific mechanic, and there’s a time to move on from it. But you don’t have to say “goodbye” to it. All that hard work doesn’t have to be for nothing. If you just write the mechanic down and your reflections on it, and what worked and what didn’t work, all you might be saying is “see you later in another game.”