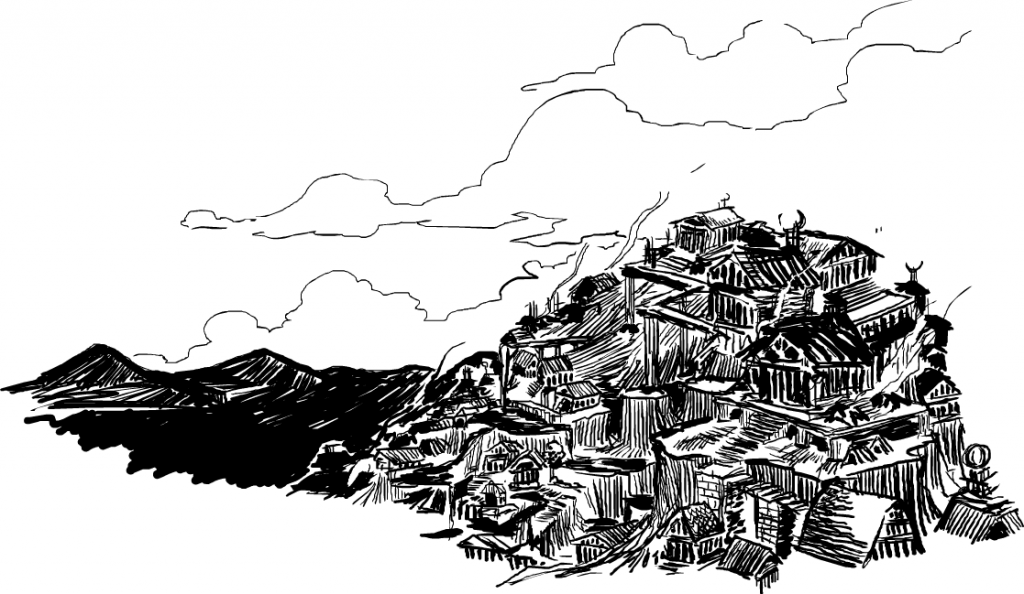 From Jiffycon yesterday, a brief description of our kingdom and characters from the first official Questlandia playtest:

The game took place in the Kingdom of Aria. Aria is ruled by a polytheistic theocracy, where the gods walk among the people. The game centered around the unnamed capital city. The capital is an ancient, overbuilt city with new structures stacked atop crumbling stone. The Kingdom of Aria, once home to a great many races, is now dominated by a humanoid majority. The wealthier human race lives at the top of a mountainous peak, while the oppressed minority races congregate at the bottom. In Aria, military service is required to secure citizenship. Despite all races serving in the military, after fulfilling their duties, they are equal citizens on paper only.

Our kingdom was sick, and talk of revolution was stirring in the lower district. We decided that this sickness, affecting primarily the lower classes, was caused by humans in the uppermost district practicing dirty magic. In this game, magical abilities were granted to certain humans by the gods, and the gods tended to favor the powerful and wealthy. This poorly executed magic was causing a sort of “mana runoff.” This runoff flowed down through the canals, tainting the water supply in the lower district.

Our characters were Arrakas, a dark mage fighting for the liberation of the underclasses; Xu, a mute warrior from the lower district, weakened by mana runoff and kept alive by Arrakas’ dark magic; Shwarka the Learned, a human scientist researching a way to make use of the wasted mana runoff; Traya, an outcast from a plantlike race who has fallen in love with Shwarka while assisting him with his research; and Hesiod, a holy person fighting to inspire revolution in the under classes by encouraging the worship of Oda, the much-ignored goddess of love.

And of course, we can’t forget ShwaShwa, the recently deceased baroness who kicked off our adventure postmortem.