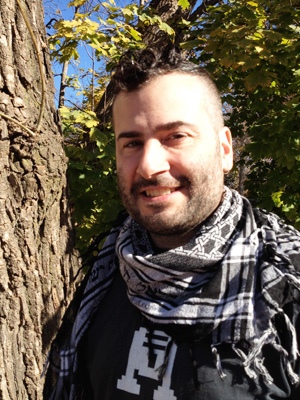 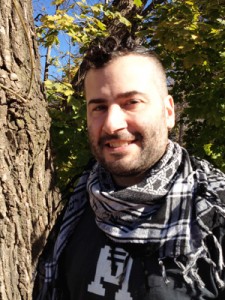 In the debut interview for Make Big Things, I talk with Joshua A.C. Newman of the glyphpress, a small press publishing roleplaying games, ancient poetry, mystical allegories, and experimental content.

Joshua is the creator of sci-fi roleplaying games Shock: Social Science Fiction (2006) and Shock: Human Contact (2010). His first game, Under the Bed (2005), is a card-based roleplaying game about the fears and competing affections of childhood.

Joshua’s last project, Mobile Frame Zero: Rapid Attack, was a huge undertaking. The Mobile Frame Zero Kickstarter campaign had a fundraising goal of $9,000. In just over a month’s time, the project raised over $82,000, exceeding that goal by more than 800%.

Today, I talk with Joshua about game design, good design, and the challenges of unexpected success.

Q: Hi Joshua! Thanks for taking the time to answer some questions. I thought you’d be a great first interview for Make Big Things because your creative work, and more importantly your creative outlook, are right in line with the mission of this site. I’ve been looking back over the Mobile Frame Zero Kickstarter, which closed with more than 2,600 backers. Did you encounter any unexpected challenges trying to manage a Kickstarter project of that size?

A: Man, yeah, it’s hard. The cheap joke is that this kind of thing is a high class problem. Which is true, but it’s still a problem, complete with all the cascade of issues. I never want to sound ungrateful to the backers who were so amazingly supportive, both emotionally and creatively, but with that volume of people came responsibilities that I simply didn’t know how to discharge.

For instance, in my initial spreadsheet, I had expected between 300 backers (the number I got for Human Contact, which was a lot at the time) and 600. It seemed possible that I’d get double, right? And I thought, OK, what happens if I got, like, 900? Triple the number of my last project — the project that went so well that Kickstarter contacted me and asked me to speak on a panel at PAX East with Max Temkin of Cards Against Humanity and Andrew Plotkin of The Hadean Lands? The one that had exceeded my goal of $2400 by over 200%?

What I didn’t expect was that I would get so many backers that I wouldn’t be able to even fit the books in my house.

I thought about what I was and wasn’t willing to do. For instance, signing books had been enormously challenging. There was no reasonable workflow, and it took me months to sign and mail the books. So I decided not to sign any. I thought I was being pretty clever.

What I didn’t expect was that I would get so many backers that I wouldn’t be able to even fit the books in my house. That I would have a print run eight times that of my largest print run ever. That the printers I’d been using for years would literally tell me that they couldn’t handle the volume. And that I couldn’t possibly hope to correctly address that many packages.

So I had to shop out to a fulfiller who would make errors at a much lower rate than I would. Shopping it out meant it would cost me about $2 a book, shirt, and decal set. That doesn’t sound like a lot, but it represents some $6,000 of expenses for which I had not initially budgeted. Furthermore, during my campaign, our House of Representatives, operated without compromise by the Republican Party, suddenly took an interest in the pensions of mailmen and gave the USPS a mandate to back their workers for 75 years, forcing a huge increase in shipping costs and adding an additional $6,000. My $6,000 budget had been tripled to $18,000 to favor private couriers.

That increase in scale, as welcome and unexpected as it was panic-inducing, has meant that I still have a handful of custom high-level backer rewards that I haven’t fulfilled.

Q: There were a number of people involved in the making of Mobile Frame Zero. Can you describe your role in the project? How did you end up getting involved?

And that’s a lot of work! But Vincent designs better rules than I do. Soren designs better LEGO robots than I do and designs excellent settings. Thor brings skill and experience in editing both technical and game books. Rich draws really solid robots. Emilee draws sympathetic, kinetic people. Wordman can design and render completely lucid LEGO instructions. These are all parts that, if they’d been done by me, would have been much, much worse. I’m just not as good at those things, and if the book and game were to be as good as I wanted them to be, I was going to have to ask for help.

It even started as someone else’s project. Vincent first published Mechaton some 12 years ago now. I had some creative input at the time, but it was Vincent who resolved all of the challenges I’d wanted solved with the game. It was only when he got a cease and desist letter challenging his right to the trademark that he started to give up. He could tell that the game had legs but that the amount of work would be colossal. After I insisted that we work on developing it in a new direction (probably for a year or more), he offered me the license.

He was right about the amount of work, though.

A: The benefits are that everyone does what they do best. The struggles are that, when everyone wants to do a great job, your visions of how to do that can clash. Where the division of responsibilities got vague, we wound up with conflicts.

Q: You also self-publish games through your own small press, the glyphpress. What inspired you to start your own publishing company?

A: The first publication of the glyphpress, was an edition of two, called Homunculand. I completed it in April, 1999 as my thesis project for college. I’d always been interested in the medium of books, having illuminated a handwritten history of an interstellar society in 1994 and an Audubon-style zoölogical survey of the Jovian moon Europa in 1998 or so. The codex is an amazing technology and I love finding ways that it excels and exceeds, for instance, electronic publishing.

A publishing company is how I get to make books! It’s that straightforward. If I could, I’d do letterpress, handsewn game books, comics, liner notes, and notebooks, too.

A publishing company is how I get to make books! It’s that straightforward.

Q: In the world of self-publishing, it’s not uncommon to see one person take on every part of a project alone—from writing to editing, artwork, and layout design. How do you recognize when outside help is needed?

A: If it’s at all possible for me to find someone who’s better than me at the parts I don’t like to do, I budget for them in the project. I love Ben Lehman’s writing, so he wrote fiction for Shock: I love Alessandro Alaia’s illustration, so he painted for me in Human Contact. I’m awful at logistics, so I find people who are good at tracking money and objects, rather than doing a terrible job myself.

Never add friends to a project just because you like them, because then you’re putting money between you and making less stuff.

Q: What advice would you give to creators who’d like to work with other people, but are operating on a shoestring budget?

A: Do all the parts you can do yourself by keeping it simple. If there are parts you can’t do that you must do, hire someone else to do them. Otherwise, encourage them to do their own project. Never add friends to a project just because you like them, because then you’re putting money between you and making less stuff.

In our game design coöp, we help and encourage each other, but we’re all working on our own projects. We work side by side and give assistance when necessary (or fun), but none of our projects are collectively owned. Because we like each other too much.

Q: Your background in graphic design really shines through in your games. Not all roleplaying games place such a big emphasis on design and composition. What graphic design principles have you found most useful in game design?

A: Like so many creators, I consider myself a total hack. I think John Harper and Daniel Solis are far better graphic designers than I am. To compensate, I fall back on principles:

Use a grid system. Make it obey a principle of proportion (any principle is better than none, but experiment to figure out which ones are better than the others for this purpose). Break it when you reach the punchline.

Use all the dimensions of a page. A book is not a list of letters. Maybe make multiple columns, or maybe use sidenotes and footnotes. Maybe pop boxes. Treat the page as a plane.

Recently, I’ve been trying to learn how to use the volume of a book, where I use the edges of the pages to convey things. I learned about this one from Chip Kidd, who’s done some neat stuff with legible edges.

Q: What advice do you have for someone who’s interested in designing a roleplaying game, but doesn’t know where to start?

A: Play games, then play other games than the ones you know, then play them with people you don’t know (yet). Don’t imagine that you know the spectrum of the medium until you’ve tried lots of things from lots of design communities.

Q: Are you working on any new projects right now that we should be keeping an eye out for?

A: I’m working on Mobile Frame Zero 002: Alpha Bandit right now, which is a set of rules for carrier-based space combat in the Solar Calendar of Mobile Frame Zero. My publication schedule has a couple of items after that, but I don’t want to make any promises! They’re Skiffy things, and only some of them have to do with giant robots.

Q: Last but not least—probing the source of your inspiration! List one book, one music album, and one film that has inspired your work!

A: My biggest literary inspiration is probably Iain M. Banks’ Player of Games. It’s imaginative, lets its protagonist make bad moral choices, and is simultaneously critical and loving of his own society. Ursula K. Le Guin’s The Dispossessed is subtle while being aggressive and forthright in ways that really compel the reader to think, rather than feel satisfied at her answers. I consider the two a set that anyone who’s into social science should read.

Kraftwerk’s 1985 album, Electric Café is my go-to piece of music. I used to listen 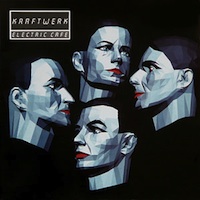 to it with my cousin while we built plastic Battledroids — the ones that became Battletech’s “Battlemechs” later — and it still drives me when I make stuff. Kraftwerk’s music is some of the best science fiction you’ll ever hear a robot play. Well, with the possible exception of Janelle Monáe’s Metropolis cycle.

Wim Wenders’ Until the End of the World has had a lot of impact on me, with its speculation about the impact of search engines on privacy, written in 1992. But you can easily tell that my biggest film inspiration is Blade Runner, just because I use it as an example all the time. It perfectly crosses a real-world concern (dehumanization for the purposes of enslavement of other people) with speculative world change (artificial humanity). And then it goes and makes a world that we can very nearly recognize right now. We’ll have to check in on it in 6 years, when it takes place.

You can find him online at: