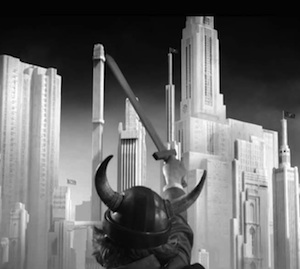 A list of music videos I turn to when I’m in need of a creative boost. To be used for worldbuilding, brainstorming, and a general appreciation of that beautiful brainspace where the audio and visual collide.

Sigur Rós – Glósóli
A group of children are called to their leader by the beat of his drum. The children weave their way through rocky Icelandic hillsides and hot springs. It is lovely.

Justice – Civilization
An electroclash mashup between the Neverending Story, the Lion King, and maybe…the original Planet of the Apes?

Kate Bush – Cloudbusting
A collaboration between Kate Bush and Terry Gilliam. With actor Donald Sutherland as Wilhelm Reich (inventor of the orgone energy accumulator) and Kate Bush as his young son, Peter.

Gotye – Bronte
A great addition by my friend and fellow creator, Jason Woofenden. In the creator’s own words: “The intent of the clip then was to highlight the importance of our fleeting relationships with animals culminating in the girl’s realisation that, while her relationship with the herd is no longer possible, the experience enriched her life.” (From Motiongrapher.com)