Themes vs Mechanics: Starting a game over from scratch

I want to talk about taking a game approaching completion, burning it down, and starting over. This post contains pirates, historical gushing, and thoughts about the game design process.

For the past few months, I’ve been working with Brian Van Slyke on a cooperative board game about pirate culture in the early 1700’s. We’ve gone through multiple playtests and iterative improvements. But after our tests at Metatopia last weekend, we’ve decided start over from scratch. 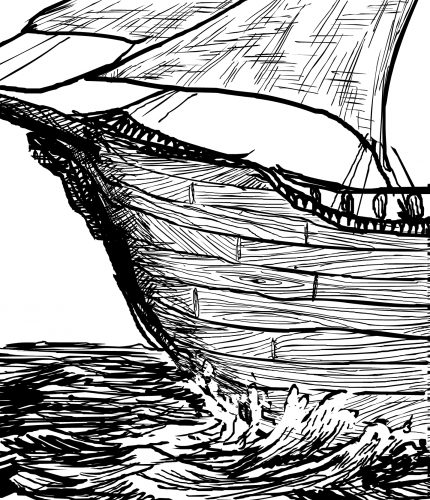 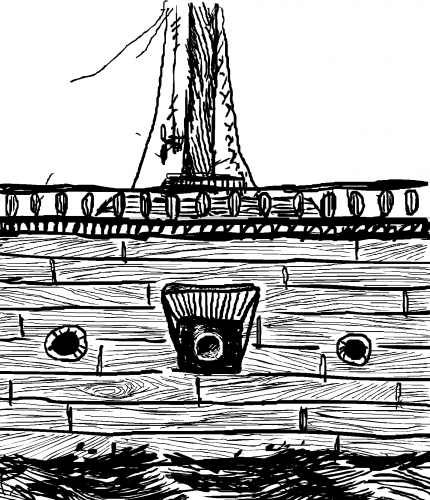 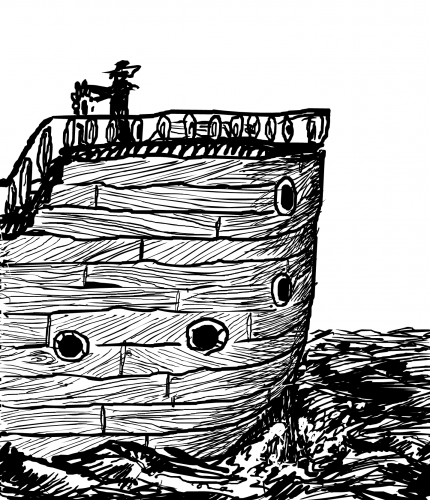 All of our playtests, including the Metatopia games, have been a lot of fun. We’ve had frantic shouting between the crewmembers, dramatic ship-to-ship combat, and surprising encounters while sailing the Atlantic. But the themes we wanted to explore just weren’t there.

The lives of sailors in the Golden Age of Piracy were wretched. This was a time of incredibly powerful trading corporations, and a global economy based on the shipping of goods and slaves across the Atlantic. The sailor of the early 18th century had a miserable job, with low pay, months away from home, poor food, and vicious punishment for any kind of disobedience. But they had an unusual opportunity – the possibility of a life of piracy.

Would you become a pirate? It would mean becoming a criminal, and a death sentence should you ever be caught. You would have to leave your home behind, along with your job and hope of ever securing another. Most of the time, it would mean joining a ship of strangers with a murderous reputation. You would be giving up your nation, and if you were religious, an eternity of hellfire in the afterlife.

But compared to the life of an employed sailor, being on a pirate ship was heaven. Ships were run democratically – you had a vote and a say in who should be captain, what destination to sail towards, and whether to engage hostile ships. Treasure was split evenly between all crewmembers – a share for each person aboard. You could eat well and drink with abandon. Most ships you met surrendered without firing a shot, and provided a bounty of riches, supplies, and beaten-down sailors eager to join your crew. Many pirate vessels had a massive surplus of crew – where a merchant ship might have 16 sailors, a pirate ship might have 60-80! This meant far less labor for all aboard, and a life of relative ease. Pirate ships even offered healthcare for the injured, rewarding gold to those hurt during battles. The culture aboard a pirate ship was egalitarian, cooperative, and offered a life completely unlike what a poor man of that time period could expect anywhere else.

Bartholomew Roberts, a successful pirate captain, put it like this:

“In an honest service there is thin commons, low wages, and hard labour. In this, plenty and satiety, pleasure and ease, liberty and power; and who would not balance creditor on this side, when all the hazard that is run for it, at worst is only a sour look or two at choking? No, a merry life and a short one shall be my motto.” 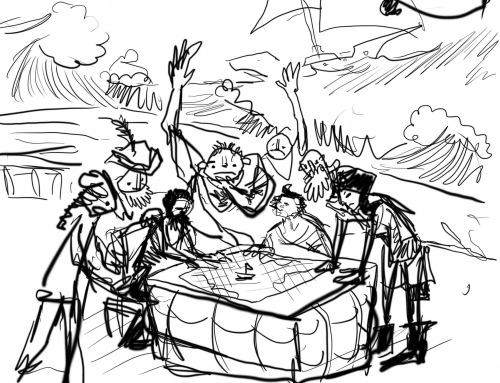 To me, the choice that pirates made and the stark contrast of their lives before are incredible. This was a self-made culture that reached such heights of power that the nations of the time waged a war of extermination in response. I want this game to be an exploration of the lives of not just famous pirate captains, but the ordinary men (and occasionally women) who abandoned their countries and cultures to live out a few short years or months of freedom.

So. After our games at Metatopia, it was clear that these themes weren’t in the game we had made. What we had, instead, was a sort of classic pirates game – adventure on the high seas, accumulation of vast wealth, dramatic ship-to-ship cannonfire and boarding. The lesser-known culture of piracy was largely relegated to flavor text.

One aspect that we had designed into the game was an emphasis on democratic, cooperative decision-making. This was part of what made pirate culture so extraordinary – it empowered every person on board to be a part of the decisions that shaped their lives. And at the game table, people really were having the kind of discussions we hoped! They were cooperating, discussing the merits of various courses of action, and coming to a consensus whenever possible. But the significance of these conversations was completely lost. Because at the modern gaming table, this kind of discussion is the norm. Without being able to contrast these discussions to the complete disempowerment of a hired sailor’s life, the players didn’t see anything unusual about their democratic decision-making.

The takeaway is that on a deep level, the themes we hoped for didn’t exist in the game we made. So we’re starting over from scratch. It hurts to dismantle everything we’ve built up. But that feeling is balanced by the hope that we can take what we’ve learned and build a system that intrinsically expresses what this game is about. The discussions we’ve had since Metatopia have been bursting with ideas.

I can’t wait to fill you in on the progress we’ve made already! It won’t be long before we come back to the playtesters with a new take on the game.

If you’re interested in learning more about pirate culture, check out the books Villians of all Nations and The Republic of Pirates!