Over the course of its development, Noirlandia has changed in a thousand ways. I want to talk about just one of those changes, a change that had a small impact on the rules but a big impact on the game’s tone.

Noirlandia’s setting changes from game to game. The mystery takes place in a player-designed city; sometimes existing in a far-off future, sometimes Medieval or Victorian, sometimes featuring people very unlike us. The common thread between all these possibilities is the city’s corruption. In all timelines, in all varieties of people, you can rely on the city having a rotten core.

In our city, we play a cast of characters all fighting for answers about a convoluted murder case. Each character is defined by their profession, where they live in the city, and one central question. That question used to be, “What are you haunted by?” Now, it’s “What principle guides you?” After I made that change, Noirlandia became a whole different game.

When I first starting designing this game, and thinking about the characters I know from noir film and literature, a consistent image appeared – one of people broken, weighed down by their past. Chinatown’s Jake Gittes, for example, who is haunted by the memory of his police work in Chinatown. Or Sunset Bouelevard’s Norma Desmond, haunted by her Hollywood decline. “What are you haunted by?” became my central question posed to each character, and I wrote possible answers like “the case that was never solved” or “the memories of loved ones.”

I’ve changed the question, but not because the first was broken. In fact, it successfully helped to create memorable characters and stories. We’ve had games that followed a retired detective, haunted by the spectre of addiction. Or a wealthy heiress, haunted by an insidious conspiracy. The stories around these characters developed a certain theme – characters who faced their past, and sometimes found absolution.

There were a couple side effects of this focus on the past. For one thing, it gave us a lot of side stories. We weren’t just focused on the murder at hand; we were looking into 3-5 backstories, which were all competing for time in the spotlight. Another effect was changing the balance of setting and characters. Once we designed our city, we didn’t have much time to explore and expand it, because the narratives were so personal. I was receiving consistent feedback that the setting we created felt abandoned once the mystery was underway. 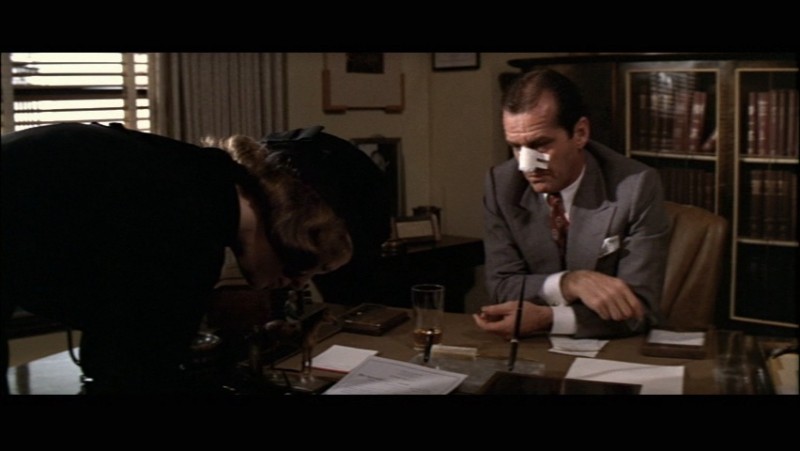 Jake Gittes – is he defined by his past, or by his principles?

I revisited some noir source material. As I watched Jake Gittes get slashed and shot at in his search for answers, I realized that this wasn’t just the story of a man weighed down by the past. It was the story of man who was driven by his principles, despite the cost. Holding to his principles makes him an enemy to his city’s corruption. The city itself is the villain of the story.

I made a list of principles that could drive the game’s characters. My goal was to make principles that would be hard to keep, and dramatic to break. Since making the change, I’ve seen an assassin who has sworn to never harm another, an investigative journalist who refuses to tell a lie, and a police officer who has vowed to never betray his own.

These characters brought a new theme to the mystery – principles versus corruption. Some characters broke, some stayed true, but they all helped tell a story of desperate idealism in an amoral world.

Having this new theme brought a torrent of design questions – what happens when you break your word? How can the world tempt you? Once broken, what can you do to redeem yourself? Answering these questions has narrowed the game’s scope and sharpened its story. In the end, I feel like it came down to letting go of some of the surface qualities of noir – the grim, haunted protagonists – and finding the core conflict beneath the surface.

I was anxious about making such a big change in the game this late into development, but the reward has been creating an internal consistency. The game’s city, characters, and mystery are all supporting the same story. I believe Noirlandia is a better game because of it.