How do you choose a system for your game that best supports the story you want to tell? 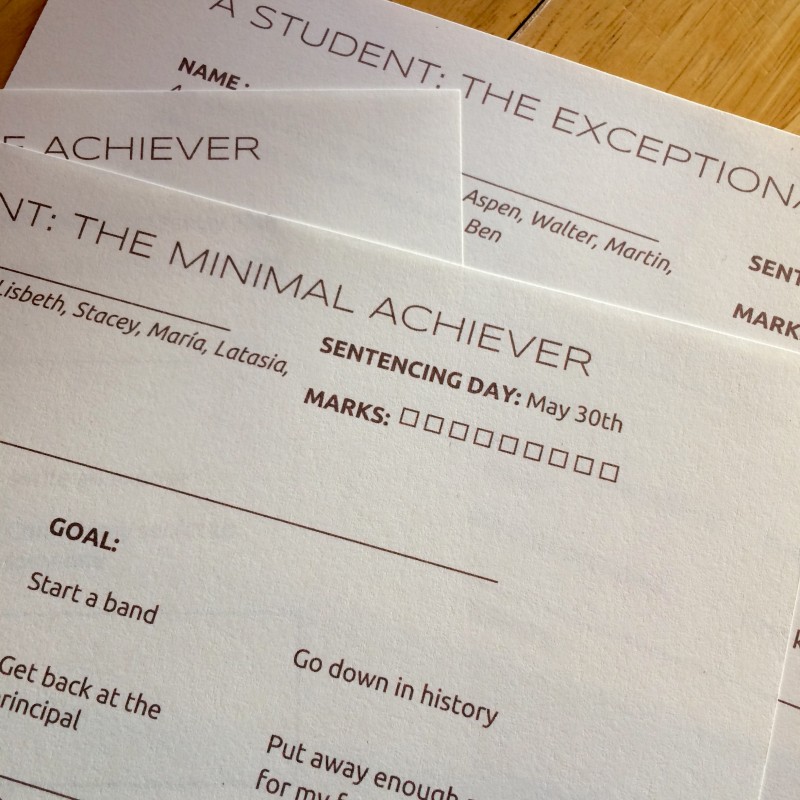 When we first designed the mechanics for Questlandia, I’d been playing around with a bunch of existing systems, and none of them were doing quite what I wanted. When I expressed my frustration to my partner Evan (who co-designed the game), he said, “What do you want the story to feel like? Start with feel and go from there.”

I realized that I’d been working backwards. I’d started with dice hoping to stumble on the right feel for the game, instead of starting with feelings, and letting feeling and tone guide me to the right system. I stopped thinking about dice, and took a step back to list out some “feely” things I was hoping for:

If you’ve played Questlandia, you’ve hopefully seen the mechanics reflect that emotional experience.You’ll often come away from a scene with one or two victories. However, no matter how awesome things go, the opposition dice will always push through at least one negative result.

The system can be nicely summed up by one of my favorite lines from the movie Dr. Horrible’s Sing-Along Blog:

So, you obtained the wonderflonium and can finally construct your freeze ray? That’s great, but…

It’s not a perfect system, but it matches the tone of the game, and I’m still pretty happy with it!

When Brian Van Slyke and I first began working on Sentencing Day, a game that explores an extreme version of the school-to-prison pipeline, we started with a hacked version of Questlandia’s system, which made a lot of sense for a few reasons:

We did a few playtests using Questlandia’s core resolution system. The first was super fun, the second was good but bumpy, and the final playtest was awkward and awful. Based on those playtests, this is where I saw Questlandia’s system failing:

Wrong pace for campaign. The system was designed for a one or two-shot game. Sentencing Day is begging to be a campaign game, and the action was rising too quickly.

Slow resolution. Questlandia’s resolution system is slow. This is fine for a one-shot but gets tiring over time.

Conflict resolution. Questlandia uses a system that resolves big conflicts. Sentencing Day is a game of small conflicts that scale as you learn more about your world. In Sentencing Day, you don’t always need to learn multiple outcomes as a result of this scene. Did you agree to pay for the keg, or didn’t you? That’s all we need to know.

Guided facilitation. GMless wasn’t working. It’s a game that requires deep character immersion and, I think, a lot of external social guidance. Players were jumping straight from the role of panicked D-student to fascist security guard and various other NPCs. It was jarring and hard to fully embody characters.

Sentencing Day deals with specific real-world social issues directly, while Questlandia lets the players invent the social ills of their world. Those social issues often run parallel to ours, but exploring systemic racism in an amoeba city in the clouds is easier than confronting racism in our own culture. Playing a racist amoeba is easier than playing a racist you, and this game can’t push people to go there without a GM. Even if it could push players to go there alone, I’d want a facilitator at the table to separate racist in-game characters from racist players. Yeah, it sucks. But it happens.

After doing a few playtests using Questlandia’s core system, it was time to try something new. I’d just finished a campaign of Monsterhearts, a game powered by the Apocalypse World system, and I was appreciating some of the things that system did. Some of my favorite parts, that I felt like Sentencing Day could really benefit from:

Stat categories tailored for the fiction of the world, and not too many of them! The stats, and the basic moves paired with those stats, tell you about the types of things this game encourages you to do. Monsterhearts is bubbling over with teenage sexuality and angst, and the stats and moves support those themes. In Night Witches, an Apocalypse-powered game about Soviet airwomen in WWII, you’re working with stats like Guts, Luck, and Medals. Those, along with your Skill stat, encourage players to attempt risky maneuvers in the name of their country—and sometimes in the name of love.

Special character moves. Special character moves build on and personalize the basic moves. In Monsterhearts, the werewolf has an advanced move called Spirit Armor, which reduces harm when basked in moonlight. The witch has an advanced move called Transgressive Magic, which lets you add +1 to spell casting when your ritual transgresses the community’s sexual or moral standards. The bonuses you get for using these moves encourage you to engage with them, and by engaging with these moves, the fiction bends to the whim of the game.

When we decided to try an Apocalypse-powered version of Sentencing Day, we started by brainstorming moves we’d feel excited to see in the game. After writing down a long list of moves that matched our characters and our world, we grouped the moves into a few different categories. Those broad categories eventually turned into our stats, each stat category received a few basic moves, and anything that didn’t fit got axed or became a special, character-specific move.

Our final stat categories were Nerve, Heart, and Favor. Bullshit was my favorite basic move, and I hope it has a place in the new game.

We then ran several different playtests of the game—all of which went better than the first Questlandia-powered playtests. But, even as a huge fan of Apocalypse-powered games, I could see that these playtests weren’t creating the types of stories we really wanted to tell.

So, what was it about PbtA (Powered by the Apocalypse) that didn’t sit well with Sentencing Day?

The stats and moves on each player’s character sheet spelled out what kind of actions could potentially happen in this game, and the type of person your character could potentially become. That was perfect in Monsterhearts, so why wasn’t it working for us?

Sentencing Day tells a story about a group of teenagers slowly coming to terms with how messed up their world is and then quickly deciding to act on it, when there’s almost no time left! That kind of story relies on a few mechanics:

Small, subtle moves at first. Characters should be sneaking, peeking, researching, stumbling on information accidentally, and generally falling in line while frantically trying to figure out what to do with the information they’ve learned.

In PbtA, both characters might have a basic move under their Nerve stat called Lash Out. One thing that we were seeing in playtests, that was impacting both the pace of the game and the feel of the story, was that players were using moves like Lash Out way too early for their character. If you’ve spent your entire life getting stomped on by your society, you are absolutely going to lash out by the end of this game. And when you do lash out, it will be glorious. But you can’t lash out yet—it’s not time! But it’s not fair to say that if the move is right there on someone’s character sheet.

A strong, guided sense of pace. In a few weeks, every character in this game will be sent to jail. In the meantime, we’ve got to make sure this mystery unfolds to the beat of a satisfying rhythm. Uncover the conspiracy too soon and the answers feel unsatisfying. Uncover it too late and your work feels futile.

Player character versus player character. Okay, so the A student can bring a gun to school. That’s fine, but it’s also kind of predictable and boring. I want the A student to be a tool of the establishment. I don’t want them to be the first person to lash out against it. If they do lash out, I want them lashing out against the wrong person—like the D student, whom society has told them is holding them and everyone else back from success! 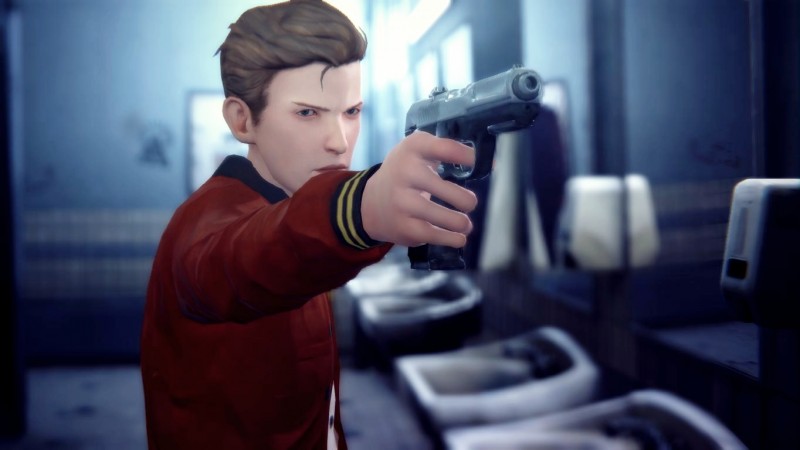 An A student…bringing a gun to school! Too shocking!

And I want the D student to be hopelessly lashing out, trying to fight the establishment in all the wrong ways because this world will punish them no matter what.

I want to pit PCs against each other in a way that feels satisfying for everyone at the table, and I want players to be able to deeply separate the initial cluelessness of their characters from the final story arc of their characters. 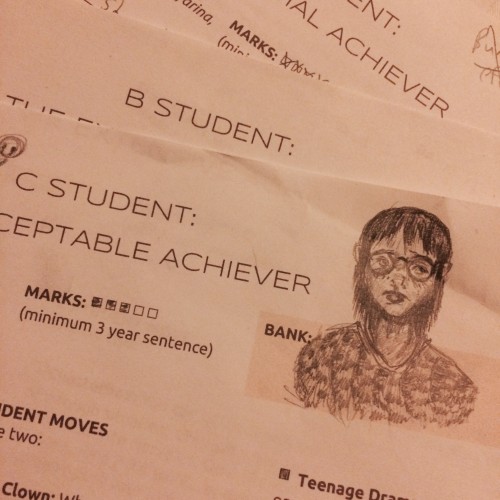 Despite the fact that this new version of Sentencing Day didn’t work as I’d hoped, I’m glad we tried an Apocalypse-powered version of the game! It allowed us to send out a solid playable draft, to answer a lot of questions about the world, and to identify places where the story was really singing—and places where the system was holding the story back.

Could the game be made to work as a PbtA hack? Of course! But why fight against the narrative limitations of a system when you can find one that really sings? We’ll be throwing out a lot in this next revision, but there are a number of PbtA things I think we’ll keep:

Now that we’ve had a chance to playtest the game in two different systems, I feel like I have a better idea than ever what type of system is needed to tell this story. Whatever that system is, I hope it:

Rather than rolling two dice in every conflict, I can imagine characters making ethical compromises and answering challenging questions to bargain for the dice they need. I can also imagine returning to a system that grants the opposition a big pile o’ dice. Being able to visualize your resources stacked against the resources of those in power feels right for this game.

And to drive home the point that you can’t just lash out and punch a teacher in the face in your first scene, I want there to be high rewards for waiting. Players should feel like they’re painfully biding their time, uncovering secrets and nurturing their own source of power before finally giving the establishment a big “fuck you.”

Whatever system we come up with will be a loving hybrid of the things we feel excited about from the games we adore. I’m not sure exactly what that will look like, but I’ll know it when I see it.