The Re-emergence of Interactive Fiction Games: An Interview With Game Designer Rebecca Slitt 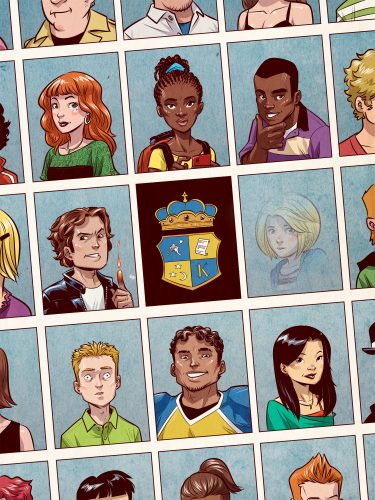 The Cover Art for Psy High, an interactive Fiction game by Rebecca Slitt

The internet and mobile platforms have given rise to many new kinds of games. At the same time, they’ve also helped older types of games find new life, thanks to the creativity of game designers and the enthusiasm of players. And interactive fiction (IF) is one of those more classical types of games currently going through a renaissance. Like me, you might remember the choose-your-own adventure Goosebumps and Animorphs books from your youth; but I can promise you that just like me, interactive fiction is now all grown up. (Although I don’t think interactive fiction has rent to pay…) Of course, there has actually always been people across age ranges playing interactive fiction games, it’s just that now the digital age has helped these gamers develop a new voice and a new community, appealing to people on desktop, web browser, and mobile platforms across the globe.

So we sat down with Rebecca Slitt to find out more about this intriguing and addicting game genre. Rebecca is an academic-turned-game-designer and longtime tabletop RPG player, who is currently working as a writer and editor for Choice of Games, a publisher of interactive fiction and text-based games. She’s contributed to the forthcoming game TimeWatch as well as Make Big Thing’s forthcoming RPG Noirlandia, and uses her degree in medieval history to make sure that her dragon-vs-dragon combat obeys the rules of chivalry. You can find her game Psy High, an interactive teen supernatural romance novel, here.

Brian: What are text-based and interactive fiction games? And how did you get into them? 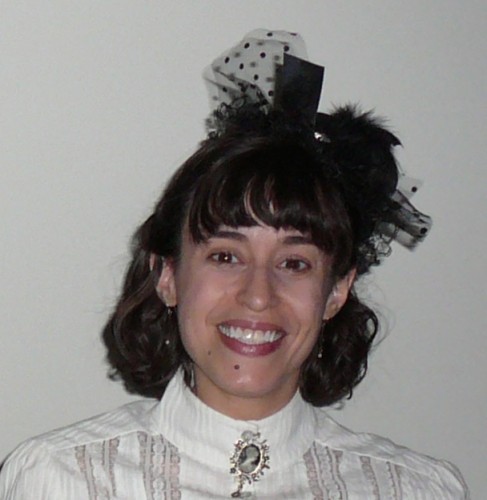 Rebecca: Text-based games, aka interactive fiction, are digital games built around words. Which is a hugely general description, because there’s a huge variety of text-based games out there!

Some are word-based puzzle games, where your goal is to find the right combination of commands to solve a problem. That’s the style of text-based games that’s been around the longest, but there are a lot of other styles out there now. Some are essentially novels where the reader plays the main character, deciding how to react to events and characters and choosing where the story goes next. Some are immersive and impressionistic, where the experience of interacting with words on the screen creates an emotional experience.

I found my way into text-based games through – appropriately enough – several paths. One was through choose-a-path books, which I devoured as a kid. My favorites were the Time Machine series – they fed my love of history as well as my love of immersive stories. I also played in some old-school text-based online RPGs – MUDs, MOOs, that sort of thing. Some were freeform text-based roleplay; others were basically multiplayer versions of the earliest IF games in which you you’d type commands like ‘go north’ and ‘get torch’ to navigate your way through the game.

As for my entry into writing and editing text-based IF professionally, that was a very happy coincidence. Choice of Games was founded by two of my friends from college, Dan Fabulich and Adam Strong-Morse. I’d been playing and enjoying their games for years – and then they happened to be looking for a new editor at the same time that I was looking for a new job. That was in the summer of 2013, and I’ve worked for them ever since.

Brian: It seems as if text-based games and interactive fiction have been going through a reemergence. Why is that? Did they ever go away?

Rebecca:They never went away! For a long time, there has been a small but continuous and very dedicated community of people who play, write, and love IF games.

But you’re totally right that the last few years have seen a lot of growth and expansion in the IF community. It’s partly due to the increased ease of communication that social media has brought: it’s now easier than ever before for IF players to find each other, and for IF writers to spread awareness of their work. It’s also partly due to the development of new tools for writing IF, like ChoiceScript and Twine, that are free and very simple to learn. So people who want to make games in general find that the easiest path into that is to write text-based interactive fiction: there’s a relatively low learning curve, and no need to learn (or pay for!) complicated graphics rendering software. People who never had the opportunity to create games before are now able to, and that’s a wonderful thing for everyone concerned.

Plus, there have been a few really prominent IF titles in the last few years – 80 Days probably being the biggest – that have drawn new players and writers into the field.

Mainstream videogames have also recognized that a lot of players like a really strong story to their game, and choices that really matter. The popularity of Telltale’s games, for instance, shows that there’s a hunger for a player-driven narrative.

And, finally, the rise of transmedia and augmented reality games plays into the resurgence of IF as well – games like Lifeline where the player’s text-based communication is the game. It’s all part of the same impulse to put the player at the center of a very complex story.

Brian: On the Choice of Games website, there’s a lot of discussion of interactive fiction in the video game era. Do you also see any similarities between text-based games and tabletop RPGs? 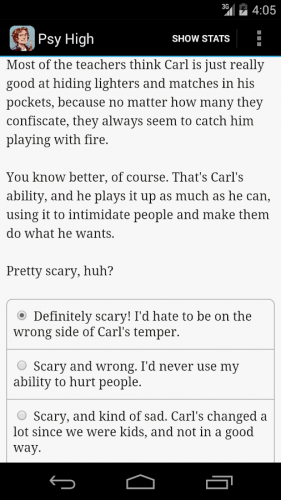 A screenshot of Rebecca’s game, Psy High, on mobile

Rebecca: Absolutely! GMing a tabletop RPG turned out to be my best preparation for writing IF. It got me used to thinking about stories that didn’t necessarily proceed in a linear fashion and could have multiple different endings based on other people’s actions. And what’s more, it taught me that I love telling that kind of story. I love that in both tabletop RPGs and text-based IF (at least, in the kind of text-based IF that I’m writing in ChoiceScript) the full story doesn’t even exist until the author and player cooperate to create it.

It also got me used to thinking about creating a story with only words – the kind of audacity of narrative that you need to create an exciting game. Unlike LARP or theater or conventional video games, in a tabletop RPG and text-based IF, you’re not limited by any technical constraints in what you can depict. Do you want a thousand-person crowd scene, or a giant spaceship battle, or a main character who can shapeshift? You can have it; all you need to do is describe it. It’s wonderfully liberating as a creator to have that kind of flexibility.

Brian: Do you have any advice for people who might be interested in getting into text-based games for the first time?

Rebecca: Play a lot of different kinds of games! As with tabletop RPGs or board games, IF can’t be defined as a single thing anymore – which is wonderful! It’s great for players, makers, and the genre as a whole.

Brian: What’s the writing, editing, and playtesting process like for your games?

Rebecca: The production process for Choice of Games is a cross between writing a novel and developing a videogame.

It takes about 12-18 months for a game to go from concept to release. We start with a detailed outline that covers both story and game mechanics: what stats the game will track, how the story proceeds differently depending on different player choices, what all the possible endings can be.

That double vision continues throughout the writing process: we constantly pay attention to both narrative and logistics. First, we have to make sure that each potential path through the story makes sense both logically and emotionally. Do the scenes show up in the right order? Does any important information get skipped if the player chooses Option X instead of Option Y? Does each plot progress in a way that makes sense? What is the logical end point of each potential path that the player can take through the story? Do all of those endings feel satisfying?

At the same time, we have to think about mechanics. A core aspect of Choice of Games’ design philosophy is that there are no “right” or “wrong” options. Rather, all options should be equally interesting, and even if the character fails to achieve their goal, the failure should be just as interesting as the success. So we have to make sure that no path through the story is easier or harder than the others, and that no option gives disproportionate benefits or penalties.

Each author has a different method for keeping track of all of the possibilities and contingencies. Some use spreadsheets to make sure that they’re keeping all of the stats balanced; some make flowcharts to track each potential path through the plot. Some make extensive outlines – Max Gladstone, author of Choice of the Deathless, is also a novelist, and he has a great essay about his outlining process for writing a ChoiceScript game and how it differs from and informs his writing process for linear novels.

Once the first draft of a game is done, we have at least a month of beta and continuity testing. We’ve got a crew of regular testers who have exceptional eyes for detail. Every game has dozens if not hundreds of choices, so every playthrough reveals a different combinations of scenes and choices. We have to make sure that every playthrough makes narrative sense. On top of that, we have to make sure that all the code works: not just that there are no bugs, but that all of the stat tests are calibrated properly so that the game isn’t too easy or too hard. We work really hard to make sure that the story flows properly and the game’s responses feel natural.

But sometimes bugs can creep in. For example, my own game, Psy High, had a lot of complicated teen-romance shenanigans, so the continuity was really difficult to iron out. Just one true/false flag getting set wrong in one place could result in confusion for the rest of the game, and hilariously sad error messages from users during beta testing: “I told Alison I loved her, but then on the way to the prom she said that we were just friends! What did I do wrong?” 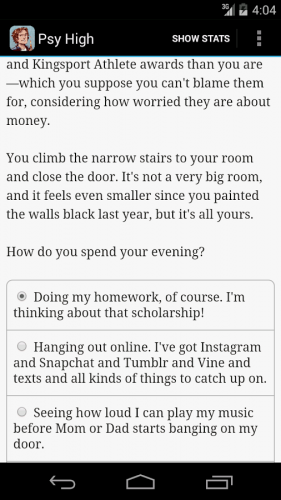 A decision you’ll need to make in Psy High

Brian: Where do you see text-based and interactive fiction games going in the next five years?

Rebecca: I think that the transmedia/augmented reality trend will continue to grow in popularity, as new types of technology get developed and incorporated into games, and as game creators find new ways to use existing technology to tell new kinds of stories. There will be more multiplayer and massively multiplayer IF games, both cooperative and competitive, that will likewise take advantage of new devices.

Relatedly, I think that the lines between game genres will blur even more. Some mainstream videogames will incorporate more aspects of text-based IF: they will strengthen their storylines, make their plots more choice-driven, and increase the amount of text and dialogue that the player sees. Conversely, IF will, thanks to the development of new tools, incorporate more non-text elements such as sound and video.

If there’s anything that the past few years have shown, it’s that people are hungry for games that have a strong story. I’m really looking forward to seeing what the next few years will bring to help them find those stories.