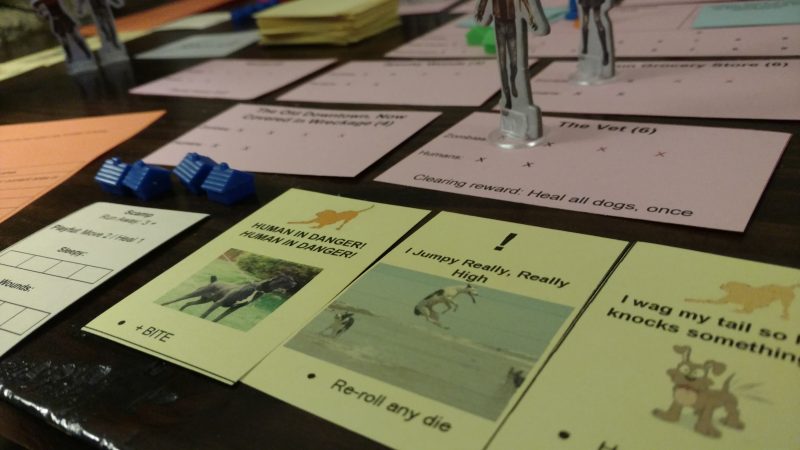 As I develop the game, I’ll be making periodic updates about the game design process to share. I feel comfortable starting this effort now, as the core mechanics of the game have stabilized (hopefully, fingers crossed), though there will still be plenty of small and medium sized changes to make.

In Good Dog, Bad Zombie (GDBZ), players are chasing away zombies in twelve different locations (ranging from “the Kennel” to “the Spooky Swamp”) in order to save humans, and then bring them back to their home territory. (Kind of like Lassie, but with zombies instead of wells.) Each player is playing as one dog in the pack, and if the dogs bring home ten humans, the humans are able to build a new home – and the players win! However, if too many dogs and humans die (or “go to the farm,” as it’s called in GDBZ) and if there are too many zombie outbreaks, then the feral tracker will reach 10. Once this happens, the pack of dogs becomes feral and wild, and they no longer care about rescuing humans – and so the players lose.

In addition, players must interact with events. Some are good, like “SQUIRREL!”, while others are bad, like “A really, really loud thunderstorm.” These either have immediate effects or present decisions players must make as a team or individual. (There are some occasional longer story-prompt events as well that tell the overall story of the zombie apocalypse.)

Recently, I play tested the sixth iteration of Good Dog, Bad Zombie. Overall, it went really well. (The playtesters even asked to play another round after we finished the first one, which I feel is pretty much the best game design compliment possible.) At the same time, there was still room for considerable improvement. Here’s what I learned about what worked and what needed work. 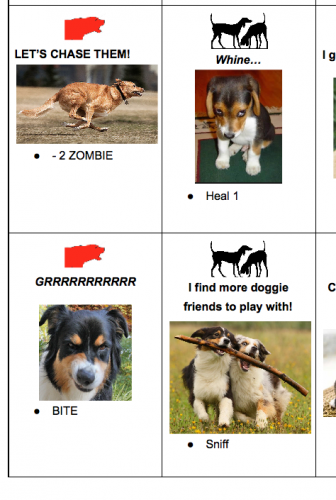 The symbols at the top of the card are the symbols used in Call of the Pack. Right now, I’m using bad clip art/random pictures from the internet until our art and graphic design team can start making these look pretty. (A skill I don’t have.) 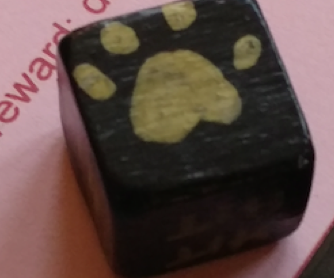 This is what you want to see when you roll the die to chase away zombies.

What Needed Work and Possible Solutions To Try Out 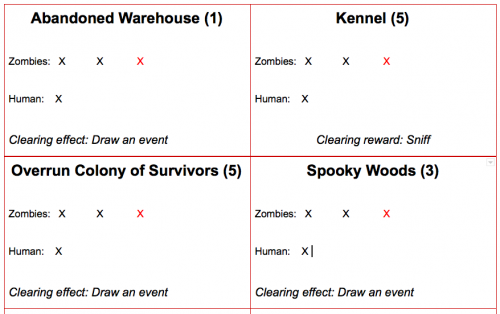 An example of a few areas in Good Dog, Bad Zombie, with the added Clearing Effect to draw events.

Well, those are the highlights of many of the things that went well, in addition to the problems and the solutions I’ve brainstormed. Hopefully these work out! Find out next time on… Good Dog, Bad Zombie progress report!