Damn the Man, Save the Music Press Release

Relive 90’s Counterculture in Damn the Man, Save the Music 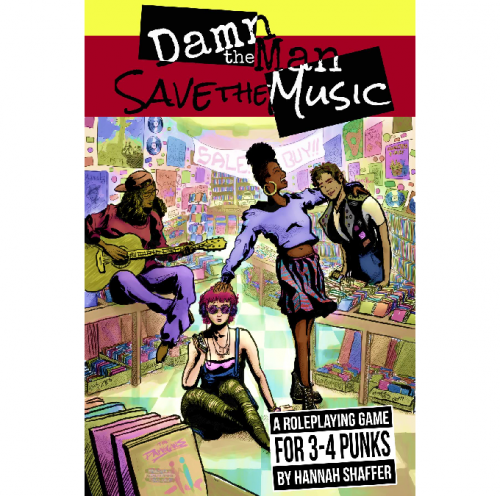 Indie Publisher Make Big Things Launches a Kickstarter for their Latest Roleplaying Game, as Part of the Kickstarter Gold Initiative

We’re in a tabletop renaissance right now. With the popularity of tabletop games erupting around the world, first-time roleplayers are turning to Kickstarter to find games that bring their passions to the table—be it cerebral horror, psychedelic sci-fi, or ‘90s coming of age stories.

Damn the Man, Save the Music! is the newest roleplaying game by the Make Big Things cooperative, the creators of Questlandia, Noirlandia, and 14 Days. In Damn the Man, players fight together to rescue their ‘90s indie record store on the brink of collapse. Inspired by movies like Empire Records, High Fidelity, and Clerks, play the punks, drop-outs, and dreamers who have one day to save what they love. The game is currently on Kickstarter as part of Kickstarter Gold, a special initiative that highlights remixes of past Kickstarter projects from a group of exclusive creators. After launching on Kickstarter, Damn the Man surpassed its initial funding goal in just a few hours. Now we’re on track to add some great Hit Song stretch goals from a lineup of game designers.

The game plays out in a three-act structure punctuated by musical montages and details of the latest disaster to befall the store. Can you appease a has-been rockstar, sell enough CDs, and find true love? You’ve got from 10am to midnight to try.

Damn the Man is an explosion of counterculture energy and optimism in a world that needs it. The game emphasizes accessibility to first-time gamers, both in mechanics and tone. It uses readily available components, like 6-sided dice and a standard deck of playing cards, and includes step-by-step scene guides for new and experienced GMs to keep the beat going. Damn the Man is like your favorite ’90s movie done better—where queer characters aren’t the butt of the joke, where white characters aren’t the only ones in the spotlight, and where two women can talk with each other about more than just guys.

Damn the Man is funding on Kickstarter now through July 20th.

Damn the Man, Save the Music Kickstarter link: https://www.kickstarter.com/projects/hannahshaffer/damn-the-man-save-the-music